The Tasmanian devil (Sarcophilus harrisii) is the largest carnivorous marsupial – after the extinction of the Tasmanian tiger in 1936.

It’s not bigger than a small dog, yet its jaws are the strongest among the land animals. Pretty much like hyenas, it can crush any bone; and like hyenas, it’s a scavenger, too.

When calm, you would probably think that it is a cute animal you could have as a pet.

But the devil is infamous for its savagery – which inspired cartoonists to create Taz.

In Tasmania (an island south of Australia), where its habitat is, has no enemies, except humans. That enables us to observe how wild it gets, only when it comes to sharing its food with its “fellow citizens”.

Every meal brings to mind a horror movie.

This savagery, as well as its murderous competitiveness, was understood only recently.

The Tasmanian devil is, as we’ve already said, marsupial. This means that the cubs are being brought up and breastfeed within their mother’s marsupium, until they get old enough to feed on their own.

So far, so good. Kangaroos grow up in a marsupium too.

But there is a major difference.

The female devil gives birth to 20-30 young each time. But within the marsupium are but four nipples!

As you understand, the she-devil isn’t apt to involve with the upbringing of her youths. It’s rather unlikely to say: “My dear George, you ate your food, now leave your brother to eat now”.

The newborns, blind and hungry, have to compete with their siblings for one out of the four nipples. If someone isn’t strong enough or doesn’t claim its merit from life…simply dies.

The most macabre is that the only thing the newborns in the pouch benefit from their siblings’ death, are a handful more proteins.

Out of the pouch will be finally ejected three or four young. The most powerful, the most determined. This, as Darwin could have said, is crucial. The survivors will be more competitive. Therefore their children will carry the genes of competitiveness.

If someone is born calmer, more “peaceable”, it just doesn’t stand a chance to get out of the pouch alive, so it won’t transfer the genes of “peacefulness” to its children –  and to its species.

The Tasmanian devil could be the symbol of the unrestrained neoliberalism, had neoliberalists knew thyselves.

In modern economy, only the firm that will “defeat” its rivals will survive. There is no code of conduct.

“The laws are written by the winners”, paraphrasing Adolf.

The small and weak will be trampled whereas the big ones will feed on the Big Mother’s milk, the state.

The neoliberalists portray cannibalism as an accomplishment: Only the strong survive.

But whoever has eyes, can see.

They can see that competence means interweaving interests.

It means hush money in the corridors of power and total indifference to those who have no power.

It means bullying and exploitation of the unskilled.

Sociology-wise, we’ve got a lot to learn by observing the case of the Tasmanian devil.

Consider how the educational system works. Children are not taught to cooperate and help the less skillful. Educational system’s goal is not the socialization (no matter what the teachers, psychologists and ministers claim) but individualism.

Cooperation and solidarity are not encouraged, instead competition is. They are not graded as a class, as a team, but as individuals.

Instead of developing their special skills through a common effort and be praised for it, they are taught how to excel – personally.

The good student must prevent the weak one copying from him, this is a rule the children learn from the first class.

Instead of learning to share, they learn to prevail at any cost – personal or collective.

So, when they get out of the pouch twelve years later, they are ready to cannibalize. Because they know that all that matters, is to be a winner; without moral qualms and misgivings.

The winners survive, the losers fall.

Like human Tasmanian devils, they show their teeth and intentions over the corpses.

Scavengers and relentless, they will pass the genes of hostility on their children, so that they will survive and cannibalize with their turn.

Perhaps those who have mistaken Darwinism for National Socialism, might believe that it is natural: the strongest survive.

But this is a generalization that doesn’t depict the species’ behavior as a whole.

For instance, with regard to social insects (ants, bees, etc), the individual is unimportant, but the cooperation between the members of the team is all-important.

You will object that man is not an insect. Let’s take a closer look then to our closest, gene-wise, relative, the chimpanzee bonobo.

In matrilineal societies of bonobos, criminal behaviour does not exist. Any disagreement or discord is sorted out with the sure-fire (and also enjoyable) way of love.

We don’t use the term sexual activity, because the variety of their sexual practices would shock many people.

As a rule, the primates are not violent (with the exception of chimpanzee troglodytes). It should come as no surprise that criminality between individuals of the same species increases when the food sources diminish.

This observation applies to the humans too, taking the Greeks as an example.

Until 2009 Greece was among the lowest ranks of the list of countries by suicide rate (this is a violent behavior since the suicide gets to the point of killing themselves) and racism was milder (which means: I exploit the immigrant, but I don’t kill them).

Since the prospect of food shortage loomed large (since no one had the foresight) the cannibalism became part of our life.

This lycanthropy is not a Greek trait. Swiss or Norwegians will react alike, if suddenly they lack the wherewithal to make a living.

Criminality is much higher in economic ghettos than in rich suburbs. Do you really believe it is just the human nature?

The hunger and injustice are the highest forms of violence. And as we’ve already said at another article: “Violence engenders violence”.

It was John Stuart Mill who said that only a free society could render people free.

The socioeconomic conditions lead somebody to crime; this is what we should learn during the first school years, instead of outshining the others.

If you have a dog constantly tied, beating him every now and then to become wild, you are guaranteed you will raise a very good guard. But you’d better watch out when you get close to him because one day, he might bite you, too.

The man who grows up unfree, chained and hungry, will bite at some point: His boss, a stranger, himself.

The man who grows up in a free society, will become free. They will learn to think, respect, cooperate, support, defend.

Right there of course comes in the required objection: The ever-present chicken-egg problem.

Free society will be spawned by free men. How such a society could ever be created – which will breastfeed its members with freedom – when freedom doesn’t exist?

A brain teaser for experts…

I would be lying if I claimed to know the answer.

“We can now do what is possible, for the impossible it takes a little longer” said someone, sometime…

But until then, we should change the name of our species from homo sapiens sapiens (since wisdom among the men is rarer than the Tasmanian devils’ solidarity marches) to homo sarcophilus. 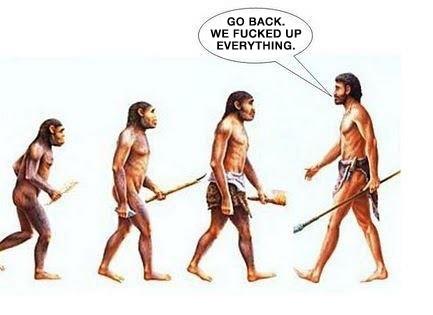