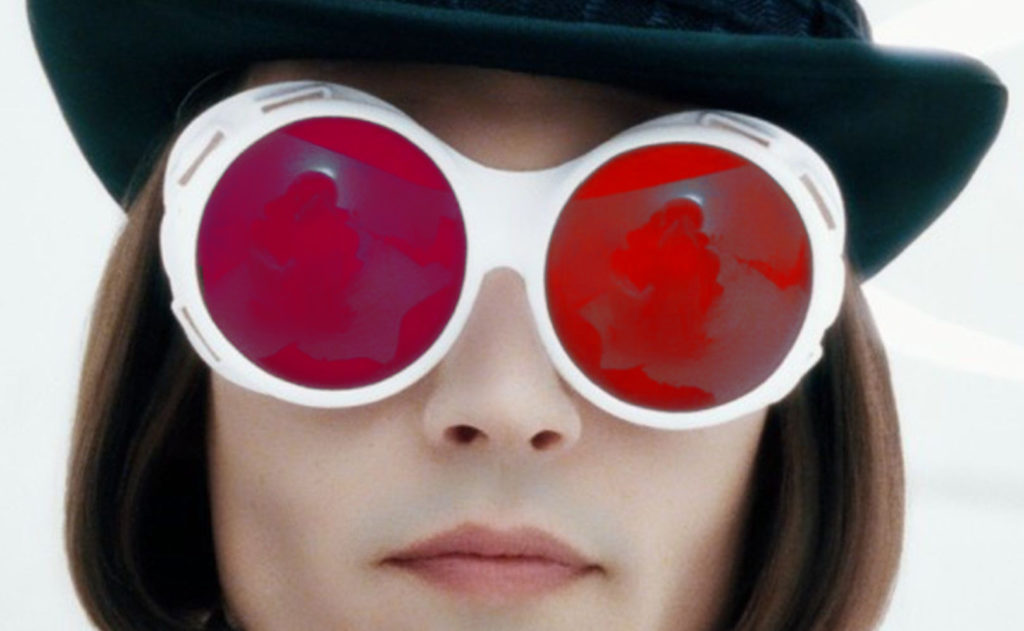 The only journey is the one within

“I seek to cure what’s deep inside,
frightened of this thing that I’ve become.”

It was an unusually bright winter. Rainer had lost his sunglasses. He had to buy a new pair, the sun was hurting his eyes.

“I’d like something vintage”, he told the saleswoman.
“Something formal I presume, to suit your style” she told him pointing at his costume.

He was working at a bank and he had just knocked off.

“Yes” said Rainer and he looked at himself in the full length mirror. He was formally dressed, as always.

“What do you think of it?” she asked him and handed him a pair that looked exactly the same with the one he had lost. She was good at her job.

“It’s precisely what I was looking for”, replied Rainer and walked to the register.
“Cash or card?” she asked him.
Rainer made no answer.
“Sir? Cash or card?”
“What’s this?” asked Rainer.

At the edge of the edge there was a small stand with the most eccentric sunglasses on it. Rainer was pointing at a huge white-rimmed pair with red lenses. They were reminiscent of Willy Wonka.

“Ehh, ….”, said the saleswoman bewildered. “You want this for a present?”
“No, I want them for me”.
“These are women’s sunglasses…”
“May I try them?” asked Rainer rather abruptly.

She handed them to him and he put them on. He looked in the mirror again, he turned his head to the right, then to the left and he put his hands in his pockets. Then he stared laughing.

The saleswoman joined him.
“Yes”, she told him, “they are very funny”.
“I will pay with card”.
She made no effort to change his mind.

Rainer got out and looked around. He was seeing everything in a shade of pink, the buildings, the people, the sky. A child pointed him to his mother. She scolded it for it was an impolite thing to do, but she scanned him from head to feet nonetheless.

He went back home. It looked prettier through the red glasses. He cooked broccoli with quinoa and chia seeds. He put two plates on the table. He ate by himself, listening to the news on TV.  When he was done, he took the second plate to the children’s room. He unlocked the door, removed the three bolts and went in.

Mary was in her cage.
“I have a surprise for you”.
“Ice cream?” went Maria.
“You know that sugar is bad for your health. Something else”.
“Fried potatoes?”
“Carbohydrate; as good as poison”
“I like them”.
“You have to learn to like broccoli, too”.

Maria turned her back on him. Rainer deposited the plate in her cage.

He produced his red glasses from his rear pocket. Maria turned around slightly, gave a look from the corner of her eye and then she turned fully around.
“They are magical!” she told him.
“I know it”.
“Did you put them on outside? Don’t tell me that you had them on outside?”

Rainer nodded with a smile.

“They are magical” said Maria and then she added, on edge: “Does this mean you will let me out?”
“It means nothing. You know I can’t do it”.
“But isn’t everything prettier with the red glasses?”
“It is, but I can’t let you out. I’ll be destroyed”.
“What are you now?”
“What?”
“You’re miserable Rainer. You can enjoy nothing without me”.
“I can, I really can”.

He went to the door, thinking that he actually couldn’t.
“Keep on wearing your glasses”, Maria shouted at his back.

He spent the rest of his day settling some unfinished business. Then he heard the news and fooled around on the internet.

Later in the evening he sat to watch a film. He was up for a film-noir night. He meant to see The Maltese Falcon but when he turned on the pay TV a commercial for Toy Story 4 popped up.

His finger pressed enter automatically. He had seen the first part twenty four years ago and it was the last animated movie he had seen since. Maria’s laughter came to his ears.

The next day he went to the bank with his red sunglasses on. His colleagues giggled, they took it as a prank. Rainer sat at his desk and didn’t remove them. He served the first client like that. He told him it would be better not to get the loan.

Initially, the client frowned. Then he said that he owned some land on Corfu, passed on to him from his parents. He had always wanted to go back there, but he had to run the shop. He would close it. He thanked him with a warm handshake.
“That’s a nice pair of glasses”, he told him before he left the bank.

Upon his exit, the branch manager approached Rainer’s desk.

“How are you Mr. Rilke?”
“Fine” replied Rainer.
“Carnival, right?” he asked pointing at his glasses.
“Oh, is it already?”
The manager straightened his formal tie.
“Mr. Rilke I overheard your conversation with Mr. Zervos. He wanted to get a loan and you dissuaded him from doing so”.
“He wouldn’t be able to pay it off”.
“This is not our business. He would mortgage the house”.
“He would lose it” Rainer said.
“Well, his loss would be our gain, wouldn’t it be?”
“For me personally, no, it wouldn’t. What do you mean by “our”…I don’t know”.
“Mr. Rilke, are you positive that you are fine?”

“I’m ready Mr. Krabs, I’m ready” said Rainer and began scattering his papers on the floor.
“Mr. Rilke!” it was all the manager could say.

Rainer got hold of his bag, left his formal suit jacket and stood at attention before the manager.

“Sir, bank clerk Rilke, VAT number 097101103 reports. I resign due to honesty. The bank is the biggest robber, ever, and I don’t want to be an accomplice in the theft”.

He made it to the door while the customers were applauding. Someone patted him on the shoulder and called him “lad”.

He went back home on foot. It was a twenty-minute walk but it took him five hours. It had been a long time since he roamed carefree the streets.

He was observing the people around him, red and magical, just like in the movies. He bought bread. He smelled a feta. It occurred to him that no scent is more familiar, nothing else would most bring home to mind than the smell of bread.

He was watching this new world, which had always been there but he never paid attention to it. Everything is new, if you take some time and look closely.

Further down the road he saw two adolescents fondle to death at the entrance of a condo. He had lost that, too, but he would get it back.

“Chocolate or vanilla? Hurry, they melt”.
“Vanilla” said Maria. “Will you let me out?”
“It is you who will let me out”.

He unlocked the cage and handed her the ice cream. Maria stood opposite him and they began licking.

“Which is your favourite colour?” she inquired.
“Red” said Rainer and touched his glasses.

They laughed as children do; and this is a special, unique laughter. The grown-ups think of it as something usual, even annoying sometimes. Yet, this laughter is the basis of happiness. The laughter of a child is the sound of Heaven. An adult who laughs like a child is a memory of the lost paradise. Everybody was once a child but at some point they stopped laughing. They put on formal glasses, black in colour to conceal their eyes, not to see, not to be seen.

“And what shall we do now?”
“We’re going to Africa”
“Going to Kilimanjaro had always been in my bucket list».
Rainer and Mr. Rilke agreed.

The banality of good

The dead don’t speak to us when they come in our dreams, mother.